Edit
watch 01:36
We're Getting Mutants in the MCU - The Loop
Do you like this video?
Play Sound
American Pie Presents:
The Naked Mile 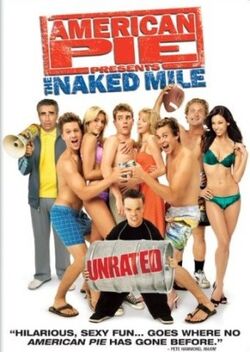 "The Naked Mile" of the title refers to a real event that was carried out annually by students of the University of Michigan until 2004. University of Michigan's naked mile traditionally occurred on the last day of classes each school year. The participants, mostly senior students, would run or bike a pre-designed course through campus while partially or entirely nude. The last "Naked Mile" was in 2004 after the University worked hard to end the tradition through arrests and threats to students who ran. Participation in the event also reportedly suffered as it attracted the attention of internet pornography operations.

Erik's friends Cooze (Jake Siegel) and Ryan (Ross Thomas) plan a road trip to visit Erik's cousin Dwight Stifler (Steve Talley) in Michigan during an event known as the Naked Mile. Tracy sees this as an opportunity to give Erik a "guilt free weekend pass," hoping that he can quench his lust and get sex out of his system since she is not ready.

Erik and his friends arrive on campus and witness an over-the-top drinking contest where Dwight is crowned a campus champion, lose a rough game of football against a bitter rival fraternity composed almost entirely of midgets, and end up in a brawl with those same midgets on several occasions. This rivalry comes to a head when the midget fraternity attacks Dwight, landing him in the hospital. Dwight is back in full form later that evening when it is time for the Naked Mile run.

Erik meets a college girl with a fetish for virgin boys and as they steal a kiss, a news crew captures the moment. Watching the news report about the Naked Mile back at home, Tracy is upset and feels guilty that she allowed Erik the free pass. Her friends convince her to also lose her virginity before he gets back. Later that evening Erik realizes that he loves Tracy and rushes back to see his girlfriend. When he gets to her house, Tracy's dad says she is at a party and Erik arrives at the party just as Tracy has headed upstairs, presumably to lose her virginity to her ex-boyfriend. Erik loudly pounds on the closed bedroom door, proclaiming his love for her. However, Tracy was not in the room because she had decided that she couldn't go through with her plans.

Later that evening, Tracy and Erik decide that they should be each others' first. They make love that night. When Erik returns to the college to pick up his friends the next morning, each boy shares stories of his experiences from the night before. The three friends drive back to East Great Falls.

During the post-Naked Mile party, Dwight spots Vicky (Mika Winkler), the girlfriend of Rock (Jordan Prentice), the leader of the midget fraternity, and the two of them head up to Dwight's room to have sex. Later, as the film closes, Dwight sent a DVD to Rock that reads, "Payback's a bitch." It reveals both Dwight and Vicky having sex, much to Rock's dismay.

During the credits, various postcard pictures show Dwight and Vicky's many journeys around the world.