Start a Wiki
American Pie Presents:
The Book of Love 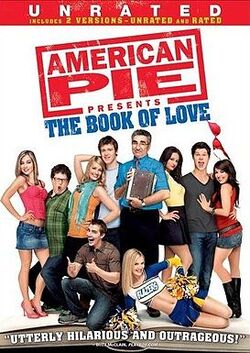 American Pie Presents: The Book of Love is a 2009 teen comedy released directly to DVD. It is the seventh installment of the American Pie franchise, and the fourth in the American Pie Presents series. It is directed by John Putch and stars Bug Hall, John Patrick Jordan, Kevin M. Horton and Brandon Hardesty. It had been reported that this particular sequel would return to the original feel of the first three films. It was released in Italy on December 2, 2009, was released in the UK on 7 December 2009 and on December 22, 2009 in US.

The story takes place at East Great Falls High, eleven years after the events of American Pie. The new protagonists of this movie are three brand new hapless virgins: Rob (Hall), Nathan (Horton) and Lube (Hardesty). One night Rob accidentally sets fire to the school library, and finds "the Bible" (or Book of Love), the creation of Mr. Levinstein (Eugene Levy). Unfortunately for them, the book is ruined. The book had incomplete advice and sends them on a helpless journey to lose their virginity. After trying and failing for most of the time, they pledge to restore the book, and to do this, they must find Levenstein and all the other people who wrote in the book, and start the restoration.

The story begins with Rob entering his bedroom, and attempting to masturbate with a peanut butter sandwich (similar to the apple pie scenario in the first film). While he is doing this his dog, Frizzie, tries to eat the sandwich, and Rob's little brother Cody takes a video of him receiving this unwanted sexual gratification. Later, Rob meets with his friends, Nathan and Marshall Lube, at school. Nathan reveals that his girlfriend, Dana, has pledged to abstain from sex until marriage despite the fact that she has already slept with six other people. Rob talks to Heidi, a girl he is attracted to, and Stifler. Stifler states that if Rob doesn't make a move on Heidi, he will. In class, Lube has a vivid fantasy about a group of cheerleaders, particularly one named Ashley. Rob and Heidi meet later in the school library where she discloses that she is a virgin, and wishes to just "get it [sex] over with". At the school dance, Nathan tries to get to second base with Dana, but only manages to offend her due to her abstinence pledge. Rob attempts to tell Heidi how he feels about her but is interrupted by Nathan and Lube. He eventually finds her in the library about to have sex with another student, and drops a lit candle in a bin in shock. This sets the library on fire, which sets off the water sprinklers.

The next day, when Rob and Heidi are cleaning the library, Rob finds a secret compartment containing 'The Bible' (The Book of Love). He shows the book to his friends Nathan and Lube and explains that it is a sex manual that has been compiled over forty years by the students who found it. The book is regarded as legendary, but unfortunately has been damaged by the water.

Later in the local mall, Rob attempts to test a tip in the book; 'Simple Flattery'. He approaches Ashley in a lingerie store and complements her. Ashley leads him into a changing room, takes off her bra and top, and makes him steal a bra for her. Unfortunately Rob is caught and forced to pay for the bra with his mom's credit card. Meanwhile, Nathan goes to Dana's church service to talk to her, but accidentally broadcasts the explicit and highly personal conversation to the entire congregation on the church's PA system. Dana's father then bans Dana from seeing Nathan. When she receives her credit card bill, Rob's mom tries to talk to him about buying underwear, prompting Rob to sarcastically say that he likes wearing womens' underwear. He is again filmed by his little brother, who again posts the footage on the internet for the whole school to see.

The next day, Heidi, Imogen and Dana are spectating at a school basketball game in which Rob and Stifler are playing. A girl called Katie tries to talk to Stifler, but he brushes her off. Rob again attempts to tell Heidi how he feels, but is unable to. Lube discovers a page in The Bible which tells of a brothel in Canada and a prostitute, Monique, who is very experienced. The entry was written in 1975, but Lube misreads the date as 1995, and they decide to visit. When they meet Monique the boys are disgusted, but Nathan states that they should go for it anyway. Nathan and Lube make Rob go first, but Monique dies while performing oral sex on him. They panic and drive back to the USA.

Rob and Heidi are once gain in the library where Rob finally tells her he is attracted to her. Heidi says she feels the same, and they agree to meet at Stifler's party later. At the party Heidi hears Rob shout "Tonight, I'm getting laid!", and runs upstairs. Stifler again brushes off Katie when she tries to talk to him. Lube tells Ashley how he feels about her, giving a speech on how he guarantees sexual satisfaction, but she still turns him down. Ashley's friend is impressed with his promise and tells Lube to meet her upstairs, but when she finds an offensive text on his phone she storms out. Nathan attempts to reconcile with Dana but offends her, making her leave once again. Rob finds Heidi in bed with Stifler and leaves the room. Heidi follows him downstairs, but Rob refuses to talk to her and begins to drink heavily. He declares "only assholes get laid!" and then behaves crudely to a random girl, who promptly goes to bed with him. She asks him to have sex with her from behind, but he hallucinates and sees Heidi saying; "You aren't seriously going to stick your dick in that, are you?". Rob then throws up on the girl's back. The next morning his mother asks him if he drove home drunk, and shows him a film she received on her phone of Rob throwing up on the girl the night before.

In an attempt to restore The Bible, Rob and his friends resolve to find all of the people who originally wrote it in order to recreate it, starting with the original creator, Noah Levenstein. They eventually succeed in recreating the book.

Rob and his friends then go on the school ski trip. In a log cabin where a few students are playing strip poker, Katie again attempts to talk to Stifler, who again brushes her off. She bets Stifler that if she wins at poker he has to apologise to her and run naked in the snow. Stifler loses and is forced to apologise and go outside naked, where he is humped ting due to last night's ordeal, Imogen keeps him company and the two forms a bond. The other students are riding up the mountain in gondola ski lifts, but Nathan has sex with Dana in the lift control room and accidentally shut off the lifts' power. In one lift, Rob and Heidi reconcile and kiss. Ashley and Lube are in another lift, where Lube falls out when trying to go for help. When Ashley climbs down to him, Lube tells her how he really feels about her, moving her to tears. Heidi and Rob return to the cabin and have sex. Lube and Ashley also go back to the cabin and have sex.

The story ends with Rob, Nathan and Lube returning the newly-restored Bible to where Rob found it, after Rob has added his signature to it. As a finale, Rob's brother, Cody, enters his bedroom to find an online film of him putting a vacuum cleaner on his penis. To his horror it has been viewed almost 10 million times. Rob ends the film with the words "Gotchaaaaa, ha ha".

The Book of Love was filmed in Anmore, British Columbia, Canada. The East Great Falls High was actually Centennial Secondary School in Coquitlam. The tram scene up the mountain is located at Vancouver's Grouse Mountain.

Retrieved from "https://americanpie.fandom.com/wiki/The_Book_of_Love?oldid=5959"
Community content is available under CC-BY-SA unless otherwise noted.