Edit
watch 01:36
We're Getting Mutants in the MCU - The Loop
Do you like this video?
Play Sound
Steve Stifler 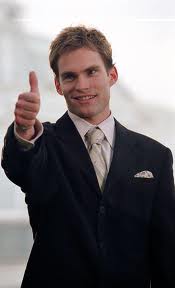 While not part of the sex pact, Stifler plays a crucial role in the film in two ways: his post-prom party (an invitation to which was the motivating factor for the main four characters to even associate with Stifler) served as the setting for the film's final act.

Stifler also becomes obsessed with ruining one of the main characters (Finch) by exposing him as a geek to the girls of the school after Finch arranges for rumors (including one where he had defeated Stifler in a fight) about himself to be spread across the school in order to make him desirable as a prom date, resulting in Stifler's planned date dumping him in hopes of getting asked out by Finch. Stifler's revenge culminated in him putting Pentalax, a potent laxative, into Finch's drink of choice (mochaccino), giving him a case of explosive diarrhea that results in Finch being humiliated in front of a large group of female classmates. Finch however got revenge by making one of the rumors accurate, which was successfully seducing and making love to Stifler's mother.

Stifler is also on the wrong end of the first of three sight gags throughout the film's trilogy in this movie. After Kevin ejaculates into a full plastic cup of beer on a nightstand in a bedroom while trying to lose his virginity, the cup is replaced on the nightstand and Kevin and Vicky leave. Stifler comes in a short time later and as he's seducing his date, picks up the tainted beer and takes a large gulp, resulting in him making a mad rush to the toilet and vomit. Kevin asks him how the pale ale was, and Stifler shouts "Fuck you!" in disgust.

Stifler reappeared in American Pie 2, having boasted of bedding 23 separate girls during his freshman year of college, not including the hummer he "got in the library stacks." He went to Michigan State University. Along with the main clique of the film series, Stifler helps chip in cash to rent a beach house on Lake Michigan with the rest of the group.

In this movie Stifler gets urinated on while under the impression that a girl is pouring champagne on him. Stifler is sitting on a lawn chair with his back to the house as John is urinating off the second-floor balcony right onto Stifler's face. He later comes back into the house and says morosely "I got peed on."

During the summer, Stifler becomes obsessed with the two women that the owners of the house hired to paint: Stifler assumes that they are lesbians and obsesses over them. The women deal with Stifler's obsession by offering to engage lesbian sexual activities in front of him, Jim, and Finch, but only if the men perform homoerotic acts that girls enjoy. The first is Stifler grabbing Finch's buttocks, the second is Stifler and Jim kissing, and the third one would have been for Stifler to receive hand jobs from Finch and Jim, which Stifler is surprisingly willing to do. Jim and Finch freak out at the idea and they run off. This annoys Stifler, as the more the guys would have done, the more the girls would have done. At the main party at the beach house at the end of the film, the two girls arrive after speaking with Matt over the walkie-talkies, telling Stifler they never said they were lesbians. Stifler realizes that they're both bisexual and ends up in bed with both of them being proud of himself.

In American Wedding, Stifler becomes the major protagonist. Here is the minor antagonist and anti-hero of the movie. He is now the high school football assistant coach; he also drives the team's bus. He crashes Jim and Michelle's engagement party (which he thought was merely Jim's graduation party, having not been invited) much to Michelle's dismay. His antics lead to an unusual Jim-plus-two-dogs foursome (which Stifler loudly enjoys). He later competes with Finch for the heart of Cadence, Michelle's younger sister. He mimics Finch's personality of an upper-class, educated gentleman in order to win Cadence over, but Finch responds by replicating Stifler's vulgar frat boy image, which Cadence surprisingly enjoys just as much, if not more.

Nevertheless, Stifler manages to bond with Michelle and Cadence's parents, and is eventually charged with holding Michelle's wedding ring. However, the parents' dog manages to eats the ring while in Stifler's care, forcing Stifler to follow it until it defecates. Steven picks up the ring (encapsulated within the feces) using a confection paper, which Cadence's mother sees and assumes to be a chocolate truffle. She insists that Stifler let her have it, but knowing he could blow his chances with Cadence for good, he suddenly pops the dog dropping into his own mouth.

Before the wedding, Stifler accidentally destroys the massive flower arrangement Michelle's family had ordered, resulting in Michelle and Cadence turning against him. However, Stifler redeems himself at the end of the film: using the football team as his minions, Stifler buys the entire content of the original flower shop and has the football team successfully set up the flowers for the wedding hours before it is to occur. By doing this, Cadence eventually falls for him and invites him to have sex in the closet. Stifler accidentally has sex with Jim's grandmother, who was put in there because she was "being a bitch". At the reception, Stifler dances with Cadence, and congratulated his friend Jim for successfully pulling off the wedding, by telling him "You did it!".

By the time of his brothers stay at Band Camp, Steve and Cadence's relationship appeared to have ended and he has become an amateur soft core porn director. His only contact with his younger brother is through letters and postcards from various places he had been 'filming'. It is unknown if any of his films were legitimate, due to the revelation of his real workplace in American Reunion, which takes place seven years after the events of Band Camp, and possibly the job was made-up to either impress his friends or bed women. His little brother want nothing do with him, when he decided to stop carrying his legacy of being an arrogant jerk. In Naked Mile, it is revealed he at some point sent a picture of his exposed buttocks to his cousin, Erik. A picture of him can be seen on Erik's noticeboard. It is apparent that Steve still kept in contact with his family members including Matt, Dwight and Erik. They want nothing to do with him, since he was always been a jerk his whole life. Matt eventually stopped being like him and be himself.

Stifler is the story's deuteragonist. He is re-introduced seen working at an office but wants to party as usual. His porn career in filmmaking was likely an act and made it up for people to see him as a big shot. He was just an office grunt who works for a geek that Stifler would have picked on in high school. He is not as much of a chick magnet he used to be. He is still childish and immature and he plans on partying with his friends, but it backfires when they drift apart from him and Jim, Kevin, Oz and Finch later apologize to him at work after learning how deeply he valued their friendship. He quits his job after his boss is being a jerk to him, showing that he has somewhat matured, but is still childish.

At the end, Stifler joins the rest of the group for lunch at Dog Years and they all agree to meet up with each other at least once a year to catch up. As this goes on, Stifler makes subtle hints about sleeping with Rachel (Finch's mom), but no one picks up on it (with the possible exception of Finch as he is the first one to respond and his response sounded as if he was in shock).