Nadia is a Czechoslovakian foreign exchange student who attended East Great Falls during the fall of 1999 and was Jim's former love interest in American Pie and American Pie 2. She is played by Shannon Elizabeth

In American Pie, Jim tries to lose his virginity with her, during his pact to lose his virginity. She asks him to help with her studies in history. Knowing that he could use this to his advantage and have sex with her, he tells her that they can start tomorrow. She says she has ballet practice after school, but asks if she could change clothes in his room, which he instantly agreed to. When she meets him at his house after her ballet practice, Jim's dad tries to impress her, but rather only embarrasses him. After he leaves, Jim tells her to change in his room while he waits outside. It is revealed that he has actually set up a monitoring system to allow him and his friends, and unknowingly the entire school directory, to watch her strip

At the end of American Pie 2 when Jim chooses Michelle over her, she is sad and hurt but then meets Chuck "Sherminator" Sherman and develops an instant sexual lust for him and drags him upstairs to have sex. The next morning, she is seen in bed cuddling with him. It is unknown what happens to their relationship after that, but it can be assumed that it was a one night stand as Sherman, with no meaning, as he later married and divorced someone else.

She is absent in American Wedding but is mentioned and is the topic of a conversation between Jim and his father. Jim asks if he could sleep with her, would he? HE replies, "In a heartbeat".

She makes a brief cameo in the ending moments of American Reunion, with a new boyfriend (or possibly husband) named Mitch, who is short in stature and looks an awful lot like Jim. Mitch, however, she does not see the resemblance. Nadia compliments Jim and Michelle on still being kinky after walking in on them fooling around, something they take with a smile. They promise to talk once Jim and Michelle are done. 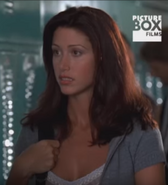 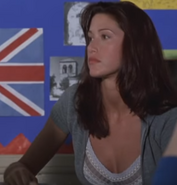 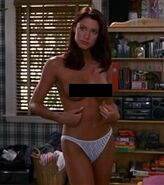 Add a photo to this gallery
Retrieved from "https://americanpie.fandom.com/wiki/Nadia?oldid=6123"
Community content is available under CC-BY-SA unless otherwise noted.