Edit
watch 01:36
We're Getting Mutants in the MCU - The Loop
Do you like this video?
Play Sound
Michelle Flaherty Levenstein 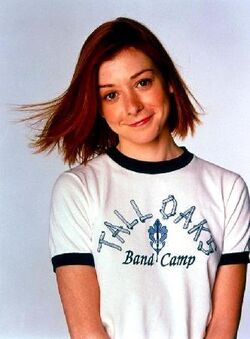 Michelle Annabeth Flaherty Levenstein, "the band geek," is responsible for what is probably the most famous line of the entire franchise, a line so deeply great that it inspired an entire movie. (Band Camp) "And this one time, at band camp, I stuck a flute in my pussy." All of America's jaws dropped when that innocent little mouth dropped such a bombshell.

At first, Michelle seemed as if she was a talkative band geek often talking about her experience. However she is revealed to be a kinky nymphomaniac as she revealed Siri did some sexual favors to herself with instruments. She also is sometimes rough during sex like the time she made Jim her "bitch" during their first time during sex and stuck a trumpet in his butt, the latter not being kinky at all.

After becoming a mother and a wife, she is shown to love her family and try to rekindle the love she and her husband felt. At the end, she is very happy after she and Jim have passionate sex and were seeing laughing after the encounter.

She is first depicted as a regular band geek and often talks about what she did a band camp.

She soon reveals a kinky side to her and asks Jim if they were going to have sex. She and Jim get together after prom because she knows that he's a "sure thing," but makes him wear two condoms to avoid his problem with premature ejaculation. She leaves him after but Jim actually revels in the fact that he was chosen as someone's one night stand.

In this film, Michelle and Jim are on good terms and he asked her to be his fake girlfriend when Nadia visits, as he had an accident. Over the few days, Jim slowly developed the real feelings for her after she taught him kinky situations.

Eventually, Jim turns down the beautiful Nadia after realizing his feelings. He confesses and Michelle is revealed to reciprocate his feelings and they have sex. The next day, Jim is pleased to wake up with Michelle still there.

They officially become a couple, as Jim later stated at the end of the film that Michelle was his girlfriend it was quite happy..

A few years have passed and they are revealed to have pursued a relationship. Jim soon decided to propose to Michelle and invited her to dinner. At first, she believes he is getting bored with her after he talks about their status and decides to show him that she is the kind of girl most guys will not admit they like and performs oral sex on him. While under the table, Michelle overhears Jim’s father Noah state Jim was actually about to propose to her. After this, she hits her head in shock, once the situation is cleared up she emerged from underneath the table and Jim properly proposes.

Her sister Cadence ends up being the focus of a tense triangle involving Paul Finch and Steve Stifler at their wedding.

After a series of mishaps the wedding ceremony is ready to take place. Michelle also went to Noah on help with her wedding vows because Jim had told her that he is very wise. Noah gives her some proper insight and tell her to write how she feels about Jim. With this she comes to see the same thing the wisdom Jim sees in his father.

Michelle and Jim are still married. However, they have a new problem to overcome: Parenthood. With this burden laying heavily on their sex life, they feel the reunion is just what they need to make the sparks fly once more. Michelle plans many occasions for them to "bone" but Jim's antics with the boys seem to foil every plan she makes. Michelle and Jim hoped to have sex at Stifler's party but yet again this was ruined by some surprises. Michelle takes her and Jim's son, Evan, to her grandmother's house because she is upset.

At the reunion, Jim and Michelle have a scenario where they pretend to be old classmates who bumped into each other. She comically get Jim to recall his past embarrassing incident in high school. They reconcile after Jim says that he married this amazing woman and how they have a child. They agree that being a mother and father to their son is important, but it is important to never forget being a husband and wife. After that, they have sex the way they know best, as a pervert and a nympho, in the band room. In the end, their marriage is stronger than ever. Michelle and Jim are flattered when Nadia comes across the scene and complimented them for still being kinky. She is last in the end credits in a photobooth picture with her husband and Stifler, implying that her relationship with the latter has improved.

"This one time, at band camp, I stuck a flute in my pussy."

"I just shoved a trumpet in your ass. Aren't instruments fun?"

"No, you dingbat. You don't just go groping away. You gotta pre-heat the oven before you stick in the turkey."