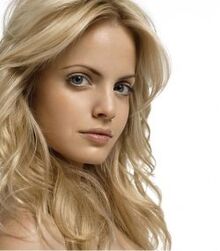 Heather is the innocent choir girl that Chris falls for while he is acting out his scheme to get laid before the end of his high school career. The tables turn when Heather ends up winning his heart, and what was supposed to be a meaningless quickie grows into a full-fledged relationship. Chris confesses the pact that the guys have made to her, but confesses that he has fallen for her and he doesn't even care about the sex, he just wants to be with her. They never bang. The end.

In American Pie 2 Heather goes to France during the Summer, leaving Oz lonely. They start doing phone sex but they get interrupted by Stifler. She appears at the party ending the Oz storyline.

In American Reunion it is shown that Heather and Oz are no longer dating. Oz meets Heather at the beach with her new boyfriend, Ron, who is a heart surgeon. But she soon finds out that Ron is a jerk and breaks up with him, while Oz breaks up with Mia, his self centered supermodel girlfriend. At the end of the film it is shown that Oz and Heather have rekindled their relationship, and that Oz has planned to stay in Michigan with her.

Retrieved from "https://americanpie.fandom.com/wiki/Heather?oldid=5874"
Community content is available under CC-BY-SA unless otherwise noted.