Start a Wiki
Erik Stifler, who preferred to be called "Erik", unlike his cousins who all are known as Stifler, is a character in American Pie The Naked Mile and American Pie Beta House. He is similar to Jim Levenstein.
Erik Stifler 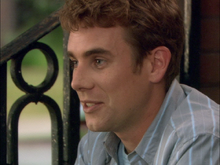 Presumably an only child and the youngest member of the Stifler clan, he is the cousin of Steve, Matt, Scott and Dwight. Unlike his four cousins, he is more concerned with the well-being of others rather than looking for women to fool around with or other guys to insult. Because of this, many have questioned his place in the Stifler clan (ie, having been told in The Naked Mile, "If you were a real Stifler, you'd have... [nailed Tracy by now], [help me steal this beer], [screwed this goat], ect"). In spite of all this, Erik seems to look up to his older cousin Dwight as a role model. Presently, he is a member of the Beta House fraternity with his girlfriend, Ashley, cousin Dwight, and best friend Mike "Cooze" Coozeman. Although even his own father despairs at Erik not acting like a true Stifler ought to, Dwight has told Erik that he appreciates having at least one normal person in their "fucked up family".

Retrieved from "https://americanpie.fandom.com/wiki/Erik_Stifler?oldid=6117"
Community content is available under CC-BY-SA unless otherwise noted.