Edit
watch 01:36
We're Getting Mutants in the MCU - The Loop
Do you like this video?
Play Sound
Elyse Houston 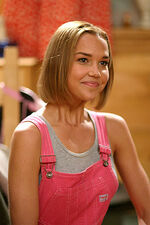 Elyse Houston is the deuteragonist of the American Pie spin off film American Pie: Band Camp. Elyse is the senior drum major of The East Great Falls High marching band. She is an uptight and neurotic girl but Elyse begins to loosen up over the summer at band camp. Elyse is the childhood friend and later girlfriend of Steve Stifler's younger brother Matt. She is a talented song writer trying to get into Robards Conservatory. She is portrayed by Arielle Kebbel.

In her childhood, Elyse was best friends with Matt Stifler. They were once chased across Kronos Creek by the cops in the winter and she remembers that Matt even cried, although Matt denies it. However, their friendship ended when Matt ran Elyse's training bra and clothes up a flag pole to impress his obnoxious older brother Steve.

In high school, Elyse joined East Great Falls High marching band, where she became friends with most of the band members, including Chloe, a goth girl with numerous tattoos who become her new best friend and eventually became senior drum major. During the East Great Falls High 2005 graduation, Elyse was nervous because it would be the first performance of their senior year but Chloe told her to relax and remember that the band was there to help her, which made Elyse calm down. However, before the performance Elyse finds Matt backstage and wonders why he is there. Matt denies doing anything and although she is suspicious of him, she forgets it. However, when Elyse and the band begin their performance, it is ruined due to Matt and his friends from the football team spraying the instruments with pepper. But, when bandmate Oscar accidentally rips down the stage curtain, she catches Matt washing his genitals in a fountain, after the latter accidentally sprayed pepper spray on them and then she furiously screams his name. She insists to the principal that Matt should be punished for this, which the principal agrees with. On the first day of Tall Oaks band camp she's surprised to find Matt there. After she learns Matt has to attend band camp as punishment for his prank at graduation, she goes to the MACRO (Morale And Conflict Resolution Officer), who turns out to be Jim's father Noah Levenstein, who toke the place of Michelle due to her being pregnant, where Matt was taken to after assaulting her rival Brandon Vandecamp in the genitals, where she told Noah that she or the rest of the band want nothing to do with Matt or responsible for actions. She says that Matt is evil like his brother, which the latter takes as a compliment, to her annoyance.