Edit
watch 01:36
We're Getting Mutants in the MCU - The Loop
Do you like this video?
Play Sound
Christopher Ostreicher 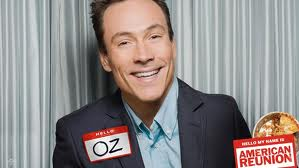 Christopher "Oz" Ostreicher is the easygoing lacrosse player tends to exaggerate his success with women, but he's at least a stinkfinger more experienced than the rest of the crew - or at least Jim, Paul and Kevin. In a cunning bit of strategy, Oz joins the jazz choir because the girls there won't have heard about his rep as a jerk jock. Heather, the choir girl he falls for, ends up winning his heart and what was supposed to be a meaningless quickie grows into a full-fledged relationship. He confesses the pact that the guys have made to her and admits that he doesn't even care about the sex, he just wants to be with her. They do consummate their love that night, but like a gentleman Oz refrains from bragging. The two maintain a long-distance relationship through American Pie 2

It can be noted that Oz is the only one from the "wolfpack" who actually has a good relationship with Stifler possibly because they played for the same Lacrosse team. Mostly Oz always disliked Stifler, but still puts up with him. Just like his friends, he usually detested Stifler's way, but in the end, he always tolerates him especially when the latter helped get Heather back.

He does not appear in American Wedding, but he was briefly mentioned by Jim in a scene that did not make it into the final cut of the movie. In the scene, Jim says "I was able to get ahold of Oz in Spain, and he says they'll be back by next spring in time for the wedding", confirming that Oz was in Spain with Heather during the events of American Wedding.

In American Reunion Oz is now a famous sports anchorman and has a supermodel girlfriend named Mia, who is really self centered and vapid. Oz meets his ex Heather at the beach and is introduced to her boyfriend, Ron, who turnsa out to be a big jerk as he tries to embarrass Oz by showing his Celebrity Dance Off video to everyone. Oz later breaks up with Mia, while Heather breaks up with Ron at the reunion. They both rekindle their relationship and Oz decides to stay in Michigan with Heather instead of moving back to LA. Oz mentioned that he missed Jim's wedding, but he won't miss the reunion and reuniting with his friends.

He is spoofed in the 2001 parody film "Not Another Teen Movie", as a character named "Ox", whose personality, appearance, and mannerisms are exactly like Oz's. The actor who plays him, Sam Huntington, even speaks in an exaggerated version of Chris Klein's actual voice.