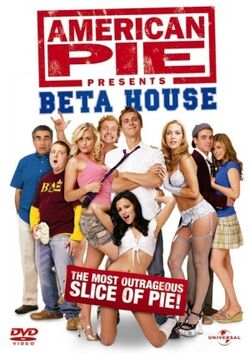 No sooner than they arrive, Erik feels let down that he and Cooze will be rooming separately, with Cooze in a single room and him sharing another. Erik is no longer with Tracy, his girlfriend in the last film, as she has left him for her ex-boyfriend Trent, leaving Erik a confidence-shaken shell of his former self. Fate, however, intervenes, and Erik meets a girl named Ashley in the coed bathrooms, courtesy of his more party prone, sex crazed cousin Dwight. Things seem to be going well for him during this brief introduction; however, it is cut short when Erik urinates on his pants. He quickly leaves and finally meets his roommate and future BETA brother Bobby. Erik is fairly grossed out as Bobby is having sex with his girlfriend right before his eyes whilst cooking bratwurst and engaging Erik in the awkward "gettin' to know you stage." From there, the boys go through a long list of trials to get into the Beta fraternity; for example getting their asses signed by a stripper and placing a live ostrich in the GEEK fraternity house.

It is only after they complete their final task which involves stealing something from the GEEK house that Edgar, the GEEKs president, challenges the BETAs to the Greek Olympiad. The loser, as a result, will give up their charter and be evicted from their house. It is revealed beforehand by Rock, Dwight's former nemesis, that due to an altercation between Edgar and a sheep, Rock's entire fraternity was kicked off campus; although Dwight is somewhat hesitant, Rock states that what they had was a rivalry and that "the enemy of my enemy is my friend." When the BETAS and GEEKs reach the final challenge, they use Edgar's fetish for sheep against him, which ultimately costs him and his house the tournament. The BETAS win and Mr. Levenstein, as the officiate, hands over the golden hammer to Dwight, who, as he accepts it, says, "Betas for life!" Afterward, the BETAS having moved into their new mansion, courtesy of the GEEKs, and hold a massive toga party, where Cooze, much to his relief, finally sleeps with Denise and all suspicions of her being a man are gone. As the morning comes, BETA president Wesley wakes up finally believing that his curse as the blackout menace is over, only to hear the toilet flush and is confronted with the female bodybuilder formerly of the GEEK house.

In a post-credits scene, Edgar instructs a stripper at the Silver Dollar to dance with the headpiece of the sheep costume.

next Movie - American pie presents The book of Love

Retrieved from "https://americanpie.fandom.com/wiki/Beta_House?oldid=6138"
Community content is available under CC-BY-SA unless otherwise noted.