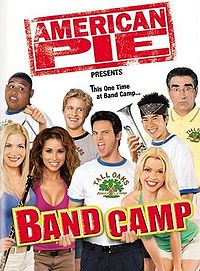 American Pie Presents: Band Camp is a 2005 direct-to-video spin-off to the original American Pie trilogy of films and the first film in the "American Pie Presents:" series. It was directed by Steve Rash and written by Brad Riddell. The film centers on Matt Stifler, younger brother of Steve Stifler. In this film, Matt is sent to the infamous band camp, where he meets a young woman and is compelled to change his ways.

The movie focuses on Matt Stifler, the younger brother of Steve Stifler from the previous American Pie films. Matt is eager to enter the family business of making porno films, so he can prove to his older brother that he is "up to the standards of the Stiffmeister." Stifler and his friends play a prank on the band students during the seniors' graduation ceremony by spraying pepper spray on the mouthpieces of the band's instruments. Matt narrowly escapes getting caught and stows the can of pepper spray in his front pocket, which subsequently leaks onto his genitals. The band members begin to play "Pomp and Circumstance", only to become too irritated by the pepper spray to continue. During the commotion, one of the students trips and pulls down the back curtain, which reveals Matt, who is washing his pepper-spray-soaked genitals in a drinking fountain, in front of the whole school.

Elyse demands that Stifler be punished for ruining their performance, stating that he always gets away with his pranks because he is the school's star football player. The school's guidance counselor Chuck Sherman ("The Sherminator") decides that a worthwhile punishment would be for Stifler to attend band camp, in the hopes that he would make friends with the "bandies" and not follow in the footsteps of his much-hated brother. When first arriving, Matt is very disrespectful to the rules and also everyone at Tall Oaks and gets his band group in trouble. Noah Levenstein (Jim's father), camp MACRO (Morale and Conflict Resolution Officer; he's filling in for Michelle as she is now pregnant), recommends that he try to fit in and earn the band's trust, which is the last thing that Matt wants to do. However, a phone call from his friend Andy, who says that earning their trust will get him better footage for his video, inspires Matt to be much more respectful and humble towards the band. Matt also finds out that his dorky roommate Ernie has an extensive knowledge of spy cameras and technology, so Matt agrees to let him help with the filming, making his first friend at Tall Oaks. As Matt "is earning the band's trust" he gets into a big confrontation with their rival band leader, Brandon, and even goes as far as to accept a duel challenge made by him, having no idea what a duel is.

It turns out that a duel is the two performers showing off their music skills, with Brandon playing the snare drum, and Matt playing the triangle. Throughout the majority of the competition it seems that Brandon is the heavy favorite; during Brandon's second round of performing, Matt walks away humiliated. As Brandon is about to be declared the official winner, Matt comes back playing the bagpipes to the tune of Play That Funky Music showing that he is actually a decent player, surprising everyone, including Elyse, who is pleasantly surprised by Matt's performance.

As Matt is still recording the various happenings at the camp, he gradually becomes friends with some of the band members from his school, gains respect, and even starts falling for Elyse, who is revealed to have been a friend of Matt's in 8th grade but had a falling out after Matt started hanging around with Steve and his friends and acting like The Stiffmeister. Matt is eventually caught with his movies, and his once-friends want nothing more to do with him.

Matt comes to realize that his brother is not as great or cool as he once thought and that following in his footsteps is not a good idea, so he deletes all the videos he recorded at band camp. He even enlists the help of the band to help Elyse get the band scholarship that Stifler accidentally made her lose in the final days of band camp.

To make it up to Elyse, Matt decides to pull the whole band together to get Elyse the scholarship to the Robards Conservatory. Matt writes up a forged letter on his computer and sends it to Elyse's house. Elyse gets the letter when she is with her friend Chloe. Elyse then gets dropped off at Robards by fellow band member Oscar. When Elyse gets to the front desk she is told by the lady at the desk that the letter she has is a fake.

When Elyse turns around and hears bagpipes, she says to herself "Stifler!" in an exasperated voice. The camera then moves in to Matt who is playing the bagpipes, and after Elyse expresses her anger with him, the rest of the band is revealed and start playing the song that Elyse wrote. When Dr. Choi and her assistant come out to see what the noise is about she mistakenly believes that the entire event has been orchestrated by Elyse and is sufficiently impressed to give her the scholarship.

Retrieved from "https://americanpie.fandom.com/wiki/Band_Camp?oldid=6085"
Community content is available under CC-BY-SA unless otherwise noted.