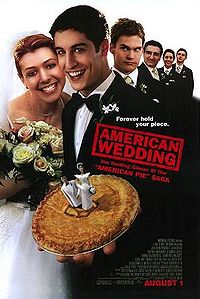 American Wedding is a 2003 comedy film that is a direct sequel to American Pie and American Pie 2 as part of the original American Pie trilogy. It was written by Adam Herz and directed by Jesse Dylan. The story has four of the five friends from the first two films getting together again, this time to celebrate the wedding of Jim (Jason Biggs) and Michelle (Alyson Hannigan). Even though their union is the main focus, for the first time, the plot centers around Stifler (Seann William Scott) and his attempts to organize a bachelor party, teach Jim how to dance in time for the wedding, and win the hand of Michelle's sister while competing with Finch.

The film begins with Jim Levenstein and Michelle Flaherty having dinner, celebrating their college graduation. Jim intends to propose to Michelle, but receives a phone call from his dad, who says he forgot to give Jim the engagement ring and was on his way. As Jim tries to stall, Michelle gets the impression that he wants a public sex act and proceeds to perform oral sex on him under the table. When Mr. Levenstein (Eugene Levy) arrives, Jim tries to hide the fact that he's being fellated. Not knowing Michelle is under the table, Jim's dad expresses his excitement at the proposal. Then, after Michelle bumps her head under the table in shock at hearing about the proposal, all chaos ensues as Jim ends up exposed and has to hike his pants up quickly. Saving face, he swallows what's left of his pride and asks Michelle to marry him. She readily says yes.

During Jim and Michelle's engagement party, Stifler, now an assistant football coach for East Great Falls High, is driving the team's bus, when he happens upon the mess of cars outside Jim's house. He thinks everyone is there for Jim's college graduation party and begins messing with the cake; Jim tries to make sure that Stifler is not seen by anyone, especially Michelle's parents, whom he is trying to make a good impression on. This fails miserably when Jim and Stifler get cake on their pants, causing Michelle's parents' two dogs to lick the front and back ends of their pants, thus making it appear to everyone that Jim and Stifler are in a foursome with the two dogs. Stifler eventually finds out about the wedding and gets permission by a reluctant Jim to attend (and plan the bachelor party) when Stifler promises to teach Jim how to dance in time for the wedding.

Complications arise when the wedding dress Michelle seeks is made by only one designer working for one store, so Jim sets out to find the dress maker for her. He, Stifler, Kevin, and Finch travel to Chicago looking for "Leslie Sommers", and split up to cover more ground. Stifler takes a detour and unknowingly winds up in a gay bar. The other guys happen upon him and meet a burly man named Bear, who knows Sommers, but refuses to introduce them because of Stifler's rude antics. In retaliation, Stifler challenges Bear to a dance-off and wins; Sommers, who turns out to be a man, agrees to make the dress for them as a result.

In the mean time, Stifler arranges a bachelor party at Jim's house. He, Finch, and Kevin are introduced by Bear to two strippers named Fraulein Brandi and Officer Krystal. Although the guys have a fun time, the party is cut short when Jim, who had arranged a dinner with Michelle's parents that night, shows up, forcing Stifler to hide the strippers, with Bear's help. Michelle's mother winds up finding Kevin (who had been playing a kinky game with the strippers) tied up in the closet, and discovers the strippers, although Finch saves them by claiming Brandi is his foreign cousin, and Krystal is actually a police officer. Stifler eventually salvages the act, claiming that the entire ordeal was a showcase to get the impression that Jim is a superhero.

Michelle's sister Cadence (January Jones) arrives to attend the wedding, and Finch is quickly attracted to her. Unfortunately for him, so is Stifler. Upon hearing that Cadence is hoping to attract a decent guy, Stifler adopts a more meek, preppy attitude and acts like Finch, avoiding swearing and speaking of philosophy and art, but mostly just quoting things Finch has said in the past. But when Finch realizes that Cadence is beginning to tire of the intellectual Stifler, Finch acts immature, rude, and perverted: in other words, like Stifler, as he heard Cadence being tired of 'decent guys' while eavesdropping on Michelle and Cadence's conversation at the airport lavatory. Cadence begins to catch on that her two suitors are acting like each other, so the question of who she'll choose becomes more complicated. Stifler unintentionally kills the flowers the night before the wedding, and actually feels bad about it, prompting him to bring in the football team he coaches to set up the entire room with new flowers. Cadence chooses Stifler, and Finch admits that Stifler was probably better for her anyway, leaving Stifler angry that he can't hate Finch after such a noble remark. He is quickly reminded by Finch that, "I did fuck your mom. Twice."

The film features several trademark infamous scenes like the first two films. Stifler is charged with taking care of the bride's wedding ring, but he accidentally feeds it to a dog. Waiting for the dog to defecate, Stifler retrieves the ring in a chocolate wrapper and goes to wash it, but is intercepted by Michelle's mother. Mistaking it for a truffle, Michelle's mother attempts to eat it, giving Stifler no other choice but to eat it himself to save face. Later, during the ceremony, Stifler takes a moment to quickly sniff the ring before handing it to Jim. He also later ends up having sex with Jim's grandmother (who had originally rejected Michelle because she wasn't Jewish), in a closet, mistaking her for Cadence; she was put there by the John and Justin (John Cho and Justin Isfeld) for being a "bitch". Because of Stifler, however, Jim's grandmother grows considerably nicer.

Michelle and Jim eventually get married. At the reception, Jim shows off the moves he learned from Stifler while dancing with Michelle; everybody else, including Stifler and Cadence, join in. Finch is sitting by himself when Stifler's mom (Jennifer Coolidge) arrives. They tell each other they are over each other, only for Finch to immediately change his mind when Stifler's mom says she has an upstairs suite waiting for them. The end of the film shows Finch winding up giving her oral sex in the tub while John and Justin watch in awe from the outside window.

The film's soundtrack includes songs by Van Morrison, Blue October, The Working Title, Foo Fighters, Feeder,Avril Lavigne, American Hi-Fi, Sum 41, the All-American Rejects, Joseph Arthur, New Found Glory, and Hot Action Cop. Badly Drawn Boy and The Libertines also have songs in the feature. Note that most songs used were already singles. This is the first film to feature the song "Laid" (Matt Nathanson covering the band James) in both the trailers and the opening sequence. Notably, it is also the only film to not play the song "Mrs. Robinson" in a scene where Finch has sex with Stifler's mother. Also it is the first of the American Pie movies not to feature a Blink-182 song.

The song "Into the Mystic", played at the end of the movie when Jim and Michelle take to the dance floor at the reception, begins as Van Morrison's recording, but midway through it changes to The Wallflowers' cover version.

Originally, there was going to be a subplot about Stifler's Mom remarrying Stifler's Dad, with Finch rushing to the ceremony to try and stop it. Tim Allen and Chris Penn were both attached at various points in the film's production to play the part.

The film is notable for the absences of several of its supporting characters from the first two films, including: Oz (Chris Klein), Sherman (Chris Owen), Heather (Mena Suvari), Vicky (Tara Reid), Nadia (Shannon Elizabeth), and Jessica (Natasha Lyonne). This is because the creators of the previous movies noted it was near impossible to create interesting story lines for all of the main characters, exception being the character Oz, who was originally going to be included, but was written out due to scheduling conflicts. In addition, the character of Kevin has noticably less screentime, with little to no signifance to the plot, although the DVD commentary suggests that his role was to be originally larger than what remained in the final cut.

Two versions of the movie have been released: the R-Rated and the Unrated Version. The R-Rated Version was not cut for theatrical release in the USA. Rather, a new version was made especially for the release of the DVD and for that reason additional scenes were filmed.

Retrieved from "https://americanpie.fandom.com/wiki/American_Wedding?oldid=6081"
Community content is available under CC-BY-SA unless otherwise noted.