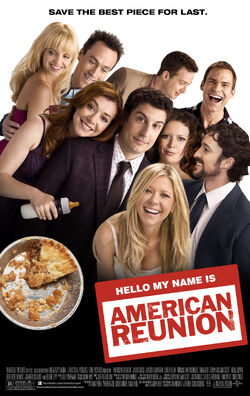 American Reunion is a 2012 comedy that is the first true sequel to the original trilogy of American Pie, American Pie 2, and American Wedding, and the eighth film overall. Scheduled for an April 6, 2012 release date, "Reunion" will be the first film since "American Pie 2" to feature the original cast. Also Nadia, Oz, Heather, Jessica, Chuck Sherminator and Vicky all make a return in this film, all who have not appeared in "Wedding". The dvd box cover is the same as the first film dvd cover and the characters are in the same place in first film cover and Reunion film cover.

Thirteen years after graduating high school, Jim Levenstein (Jason Biggs), Chris "Oz" Ostreicher (Chris Klein), Kevin Myers (Thomas Ian Nicholas), Paul Finch (Eddie Kaye Thomas), and Steve Stifler (Seann William Scott) have moved on with adult life and responsibilities. Jim is married to Michelle (Alyson Hannigan) and they have a two-year-old son, Evan. Oz is an NFL sportscaster living in Los Angeles with his supermodel girlfriend Mia (Katrina Bowden). Kevin is married to Ellie and works from home as an architect. Finch has supposedly gone missing, and Stifler works as a temp at an investment firm.

When former classmate John (John Cho), the latter half of the 'MILF' duo, organizes a "Class of 1999" high school reunion in East Great Falls, Jim and Michelle arrive at Jim's old home, where his father Noah (Eugene Levy) is now a widower after the death of Jim's mother three years prior. Jim encounters his neighbor Kara (Ali Cobrin), who he used to babysit and is soon to turn 18. Jim meets up with Oz, Kevin and Finch at a bar, where they meet Selena (Dania Ramirez), a former classmate and Michelle's friend from band camp. Stifler unknowingly happens across the group, and joins them for weekend activities.

The next day, the group goes to the beach. Oz meets his high school girlfriend, Heather (Mena Suvari), who is dating a heart surgeon named Ron (Jay Harrington), while Kevin reconnects with Vicky (Tara Reid). The guys have an altercation with Kara's boyfriend A.J. (Chuck Hittinger) and his friends, which ends with Stifler defecating in their beer cooler and destroying their jet skis. That night, the guys and girls, minus Michelle, go to the falls where they encounter a high school party celebrating Kara's birthday. Jim is forced to drive an intoxicated Kara home, who tries to seduce him. Oz, Finch, and Stifler come help Jim secretly return Kara back home past her parents, but A.J. spots them sneaking out. A hungover Kevin wakes up in a bed next to Vicky naked and assumes they had sex.

The next day, Stifler tries to throw a party like in high school, but finds everyone else has outgrown this. Jim and Michelle, who have been having a lackluster sex life, attend with a plan to recreate their prom night. They bring Noah to help him out of his depression; he later becomes intoxicated as a result of Stifler, and encounters Stifler's mother Jeanine (Jennifer Coolidge). The two hit it off immediately while chatting about their sons, and even get high. Kevin confronts Vicky about the night before, but she discloses it was not sexual and is upset that he would assume such a thing. Mia takes ecstasy while Ron humiliates Oz by showing a DVD of his loss as a contestant on Celebrity Dance-Off. When Heather goes to comfort Oz, they attempt to rekindle their previous relationship, but are interrupted by Mia, who gets in a fight with Heather. Jim and Michelle decide to role play, but Jim is confronted by Kara, who was invited to the party by Stifler, trying again to seduce him, but she was followed by a hostile A.J. and his friends. The two conflicting groups have a fight on the front lawn, which is disrupted by police officers.

A.J. and his friends proceed to escape, while Jim tells Michelle he drove Kara home when she was intoxicated and that he does not care about Kara. A hurtful Kara leaves, with Michelle also leaves, upset that he lied to her and doesn't think she can trust him anymore. The police then arrest Finch for stealing a motorcycle, much to the guys' confusion. Stifler laughs at him, thinking he's finally gotten revenge on Finch for sleeping with his mother. The other guys call him out on it. In retaliation, Stifler calls them for not bothering to stay in touch with him anymore, such as when they didn't inform him about them coming back to town for the reunion. They reply that it was because they knew he would somehow find a way to mess it up; also telling him to stop living in the past, as things can never go back to how they were in high school. Their words leave Stifler hurt and depressed, prompting him to call off the party.

Mia leaves Oz, Stifler decides to skip the reunion for work, and Michelle goes to her grandmother's. When Jim tells his father about their lack of sex, he is told they need to make time for each other. At the reunion, Finch, who was bailed out by his mother, admits that he is an assistant manager at Staples and the motorcycle is actually from his boss and stole it when he didn't receive a raise that was promised and apologizes for lying to his friends, which they accept. The guys then see the senior wishlist and read Stifler's wish, which states: "Hopes to keep the party going with his boys.", making them realize that in spite of his immature behavior, he genuinely cares for them and has always valued the times he's spent with them.

Remorseful for their actions against him, the boys go to Stifler's place of work and apologize to him, stating that while he may be a dick, he is their dick; without him, high school would not have been any fun. Stifler is emboldened by this and quits his job, but not before telling off his antagonistic boss, and attends the reunion with his friends. Kevin reconciles with Vicky, Finch gets together with Selena, Oz reunites with Heather, and Jim reconciles with Michelle. Stifler is asked to be a party planner for a wedding for his former lacrosse mates, to which he gladly accepts. He also meets Finch's mother, Rachel (Rebecca De Mornay). Stifler sees this as his opportunity to get even with Finch, and ultimately, he and Rachel proceed to have sex on the football field. As this goes on, John is reunited with his estranged buddy, Justin (Justin Isfeld) and together they look on and chant their signature word 'MILF' over and over again.

The next morning, the friends gather at Dog Years, where Jim encounters Kara and both apologize for their behavior. Oz plans to stay in town with Heather, Finch plans a trip with Selena to Europe, and Stifler plays coy about banging Finch's mom. They all agree to gather once a year to catch up.