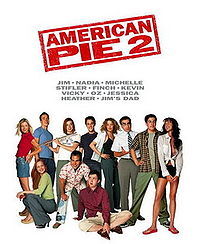 American Pie 2 is a 2001 American comedy film that is a sequel to American Pie and is the second film in the American Pie franchise. It was written by Adam Herz and David H. Steinberg, and directed by James B. Rogers. The film picks up the story of the four friends from the first film as they reunite during the summer after their first year of college. It was released in the United States on August 10, 2001, and grossed over $145 million in the USA and $142 million overseas on a budget of $30 million. Its sequel is American Wedding.

The film tells the story of the five friends (Jim, Oz, Kevin, Stifler, and Finch) and their attempts to have the greatest summer party ever. Much of the film takes place at a summer beach house in Grand Harbor (Grand Haven) Michigan, per Kevin's older brother's suggestion. The gang are also joined by Stifler's little brother Matt later on in the film, who stops by to attend the beach party.

After breaking up for the summer, the five friends plan to take off to a beach house together, where they intend to spend the summer. Stifler takes charge of much of the organizing, often ending up leading the group in their endeavors.

Oz is lonely, being away from his girlfriend Heather who is in Spain. They proceed to start having phone sex to vent some of their frustration, which ends up being interrupted by Stifler. Heather later shows up early to the party, ending the short storyline that Oz is involved in.

After arriving in Grand Harbor they manage to find work painting a house (based on the Tuition Painters franchise) in the area together, mistaking the owners for lesbians and Jim, Stifler and Finch end up performing “like for like” sexual acts on each other in return for being able to watch the girls doing the same thing. Oz and Kevin take turns watching up a ladder and listening on the walkie-talkie also in the room, along with many other people in the neighborhood.

After this, many concurrent stories run at the same time, some interacting with each other, other staying mainly separate.

When Nadia arrives early, Jim asks for help from band geek Michelle (who he lost his virginity to in the first film after prom) making a fool out of himself in front of the audience when he pretends to be Petey, a mentally challenged boy who plays the trombone. They pretend to be in a relationship so that Nadia will not expect Jim to have sex (Jim is involved in an incident involving a tube of super glue he mistook for lube and the pornographic movie "Pussy Palace", leaving him embarrassed and unable to perform). They break the relationship off once Jim is ready to have sex with Nadia, but Jim realizes that he has fallen for Michelle, and plays the trombone once more whilst she is at a major recital in order to show her that she is the one he wants to be with.

Finch has become involved in the sexual art of Tantra, and claims that through Tantra he can “make an orgasm last for days”. He is waiting for Stifler's Mom, who he had sex with in the first film, hoping she will show up and be willing to do it again. He thinks she arrives when a vehicle turns up after Stifler is talking on the phone, but it turns out to be his little brother Matt (the star of later films) after he requested to join the boys at their beach party a few weeks prior. He spends the night attempting (unsuccessfully) to seduce girls. Although he does catch the attention of Amber and Danielle (who are believed to be lesbians) over his walkie talkie device after proclaiming that they are in fact talking to the 'stiffmeister' and brings them back to the party. Steve ends up in bed with both of them, angering Matt.

The next morning, after the party, a Mercedes coupe with darkened windows turns up, Finch approaches and it turns out Stifler's Mom has come after all. He jumps at the chance and they drive off together, Stifler not realizing until after the car has driven off that it was Finch and his mother. After being asked, she reveals her name is Janine, but also instructs Finch to resume calling her “Stifler’s mom” as per usual.

The geeky Sherman gives up on getting anyone after he is turned down by the experienced and savvy Jessica, but the rejected Nadia, who wanted Jim because he was a geek, is turned on by his "Shermanator" gimmick, and they end up in bed together.

Kevin doesn't end up "getting off" with anyone, but he does seem to succeed in getting over Vicky after making advances on her throughout the film.

Anachronism: The first film takes place in the year 1999 (the year it was released) as indicated by a banner congratulating the class of 1999.  This film takes place the summer after the first year of college (2000).  However, while painting, Stifler is shown with a Mountain Dew Code Red, which had become available shortly before filming the scene, in 2001.

The following songs were included in the movie but were not featured on the soundtrack: