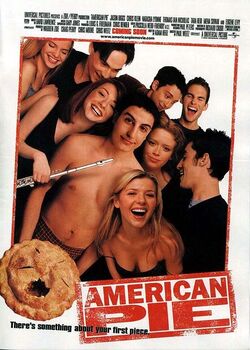 The film ranked 1st on Bravo's "100 Funniest Movies" list, and ranked 1st on Entertainment Weekly's list of the 50 Best High School Movies. In 2000, readers of Total Film magazine voted American Pie the 6th greatest comedy film of all time and in 2006 viewers of Channel 4 in the UK voted it 7th in a list of the 50 Greatest Comedy Films.

Since the conclusion of the original American Pie trilogy, featuring the courtship and marriage of the characters Jim Levenstein and Michelle Flaherty, the American Pie name has gone on to be used as an entity similar to the National Lampoon film series. American Pie has spawned four direct-to-dvd spin-off films bearing the title American Pie Presents: Band Camp (2005), The Naked Mile (2006), Beta House (2007) and the The Book of Love (2009).

Four Michigan high school seniors make a pact to lose their virginity before their high school graduation after a geeky classmate, Chuck Sherman (Chris Owen) claims to have done so at ignorant lacrosse player Steve Stifler (Seann William Scott)'s party. During this party Kevin and Vicky go upstairs and she performs oral sex on him. After Kevin cums into a full plastic cup of beer on a nightstand in the bedroom while trying to lose his virginity, the cup is placed on the nightstand and Kevin and Vicky leave. Stifler comes in a short time later and as he's seducing his date, picks up the tainted beer and takes a large gulp, resulting in him making a mad rush to the toilet and vomit. Kevin asks him how the pale ale was, and Stifler shouts "Fuck you!" in disgust and anger.

Kevin Myers (Thomas Ian Nicholas), the initiator of the pact, tries to repair his relationship with his girlfriend Vicky (Tara Reid) after they have a serious fight at the party when she accuses him of being with her only for sex. Chris "Oz" Ostreicher (Chris Klein), who is on the high school lacrosse team with Stifler, joins the jazz choir to pick up girls, as the girls in the band know little of his insensitive jock reputation. Paul Finch (Eddie Kaye Thomas), the mochacchino-drinking sophisticate, pays Vicky's friend Jessica (Natasha Lyonne) $200 to spread rumors around the school of his sexual prowess, hoping that it will increase his chances of success.

Kevin urges Jim to go back home, saying this is his best opportunity to lose his virginity. Jim arrives and Nadia orders him to strip. Meanwhile, it becomes apparent that he had incorrectly addressed the email with the web cam link to Kevin and Stifler, having instead sent the link to every mailbox in the school directory; virtually the entire student body (as well as Blink-182 in a cameo) are watching.

Finch, meanwhile, has his own problems. Stifler, angry about the fact that a girl turned him down for the prom because she was waiting for Finch to ask her, as well as the rumor going around that Finch beat him up, puts a laxative into Finch's mochacchino. Finch, being paranoid about the lack of cleanliness in the school restrooms, and unable to go home to use the toilet as he usually does, is tricked by Stifler to use the girls' restroom. Afterward, he emerges before many other fellow students, humiliated and is left dateless.

At the prom, everything seems hopeless for the four boys until Vicky asks the girl that Chuck Sherman claimed to have bedded about her "first time." She proclaims to everyone at the prom that she and Sherman did not have sex at Stifler's party, leaving Sherman embarrassed and making him wet himself. The revelation takes the pressure off of Jim, Kevin, Oz and Finch, and they head to the post-prom party with new hope.

At the after-party at Stifler's house, all four boys fulfill their pledge. Kevin and Vicky have made up and have sex in an upstairs bedroom, but the act is very awkward. Vicky breaks up with Kevin afterwards on the grounds that they will drift apart when they go to college, with him attending the University of Michigan and her at Ithaca College.

Oz confesses the pact to Heather (Mena Suvari), a girl from the jazz choir, and renounces it, saying that just by them being together makes him a winner. They fall in love, begin a relationship, wind up making love on the porch; the reformed Oz never confesses what they did.

Finch strays downstairs to the basement recreation room where he meets Stifler's mother (Jennifer Coolidge). She is aroused by his precociousness, and they have sex on the pool table. In the morning Stifler doesn't understand why the door is locked, and upon entering he realizes that his mom has had sex with Finch and faints, unable to believe that his mom and "shitbreak" are together.

Jim and Michelle have sex after he finds out that she saw the "Nadia Incident" after all. She accepted his offer to be his date because of it, knowing he was a "sure thing," but she makes him wear two condoms to combat his earlier "problem" with Nadia. Jim is surprised by Michelle's unexpectedly aggressive behavior in bed. In the morning he wakes up to find her gone—she used him for a one-night stand, which Jim thinks is "cool."

The morning after the prom Jim, Kevin, Oz, and Finch eat breakfast at their favorite restaurant - with the fitting nostalgic name, "Dog Years" - where they toast to "the next step."

The following songs were included in the movie but were not featured on the soundtrack:

Jason Biggs appears in the film Jay and Silent Bob Strike Back (2001) as himself, in which he is referred to as "the guy who fucked the pie". He then goes into an angry rant about how he's tired of it being the only thing he is known for, despite his numerous other films. Later in the film, when being falsely arrested due to a case of mistaken identity, he shouts "Don't you know who I am? Look at me, I'm the pie fucker!" The arresting officer then comments: "In prison, you'll be the pie!"

Two versions of the movie have been released: the theatrical R-Rated and the Unrated Version. To obtain an R-Rating the movie had to be cut slightly. Altogether 11 scenes were altered.

The movie was originally rated NC-17, but they had to edit the film 4 times before it got an R rating.

To see a comparison of the difference, go here: http://www.movie-censorship.com/report.php?ID=1434

Retrieved from "https://americanpie.fandom.com/wiki/American_Pie?oldid=6079"
Community content is available under CC-BY-SA unless otherwise noted.